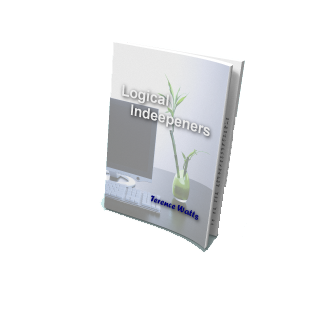 It is a fact that the determinedly analytical or logical client can find it quite difficult to get into a good working state of hypnosis.

Confusional induction methods are the 'standard' approach and while these can definitely be effective a lot of the time, they can also sometimes introduce negativity in the form of irritation. Fortunately, there is now a better way.

Logical Indeepeners is a collection of 22 never-before-seen scripts written by Terence Watts, based on more than 35,000 hours of work with all types of clients. The scripts create a state of entrainment and fascination within the thought processes of the intellectually-orientated client and in this way, concentration and focus is enhanced, and suggestibility or recall greatly improved.

11 inductions and 11 deepeners are presented as 'matched pairs' to make it easy for you to create a highly integrated hypnotic session, though any induction can be used with any deepener, giving increased flexibility.

Tree: A mathematical approach is used in this script and it is therefore eminently suitable for the obsessive type of personality. The associated deepener is suitable for use after any other induction but works especially well with this one.

Tree Deepener: This deepener uses a logical approach to access the deeper thought process - getting to the roots of things - and makes reference to both the fact that big ideas come from small beginnings and that something is already changing.

Five to Nine: This is a completely new and differently-styled version of the popular 'seven plus or minus two' script presented by the same author many years ago and which has worked so well for hundreds of people. Read this script at a steady pace - because it is logically correct, there is no need to speed read.

Five to Nine Deepener: This moves almost invisibly from logical and analytical thought processes into creative visualisation, carrying the client along effortlessly into a comfortable and effective working state suitable for either suggestion or regression.

Hands and Feet: Here, we employ the fact that it is impossible to hear a body part mentioned without the thoughts immediately exploring that part. Starting simply, it soon becomes complex enough to entrain the most analytical of brains. Good use of embedded commands enhances the depth of trance.

Hands and Feet Deepener: Progressive relaxation in a disguise of total logic, this one can assist even the most intellectual of individuals into a beautifully relaxed state from which they are often unwilling to return!

Life: Based on the twin processes of cell-division and evolution, this induces a totally focussed state of mindfulness, though it is likely that to the logically orientated client it will just feel like an immensely interesting thought experiment...

Life Deepener: This is a good one for the philosophically-minded person, though it will work well for anybody who is orientated towards thought rather than emotion. It encourages acceptance of the way that 'self' works.

Maze: This one forces continuous updating of information held in thought and needs to be read at a steady pace. This induction and the following deepener works well where there is a specific objective or goal that the client wants to pursue.

Maze Deepener: The client is introduced to the importance of belief and expectation and the fact the hopes and wishes just don't make things happen the way we want them to turn out. There is an almost invisible 'drift' from logical to creative thought.

Neural Traffic: This is designed for the introspective person who is inclined towards hypervigilance and is often 'on guard' and leans towards anxiety about self. True relaxation is sometimes out of the question with this type of individual but an 'inward focus' is definitely possible.

Neural Traffic Deepener: This works extremely well for the hypervigilant individual, especially if they are also of higher than average IQ with a questioning mind. There is a slightly confusional element employed in this one.

Pyramid: Not to be confused with the 'Now Pyramid' by the same author, this one lends itself well to getting the logical and analytical individual into a good 'working state' for the commencement of regression styles of therapy.

Pyramid Deepener: One for the experienced therapist, this can make a good introduction to regression work, which, whilst not always easy with the logical individual, is sometimes a desirable way to work. It is important to be aware that Abreaction is possible with this script.

Rainbow Prisms: This appeals to the individual with a strongly scientific nature and used with the associated deepener it can carry this personality into the more imaginative and creative areas of thought.

Rainbow Deepener: This is ideal where you need to stimulate the creative imagination, though it is important not to rush the delivery. It uses Chakra colours, though it is probably best not to mention that directly to the logical individual.

Synaesthesia: Particulalry good for the obsessive individual, this one can 'invisibly' open channels to the creative imagination via what might be called 'pseudo-synaesthesia'. (Synaesthesia is the involuntary 'crossing over' of sensory inputs, so that sounds or smells, for instance, may be linked to a colour, i.e. somebody has a 'voice like warm velvet')

Synaesthesia Deepener: This one activates the creative imagination in order that suggestion might 'take' more readily and forward pacing might be usefully employed. Good use is made of embedded commands here.

The Magician: This one explores the validity or otherwise of the belief that others might have in various forms of magic, then draws attention to scientific concepts that are no more tangible than magic. It is designed specifically for use with those individuals with a strong interest in science.

The Magician Deepener: This deepener seeks to encourage the scientific individual to accept the ability of the invisible subconscious to achieve the goals and tasks it has been charged with. In this way, suggestibility is greatly enhanced in the logical mind.

Virtual Reality Machine: This is ideal for use as a 'subconscious primer' for either regression to cause methodology or hypnoanalysis. It is entirely likely that it will engender abreaction, especially if following with the associated deepener.

Virtual Reality Machine Deepener: The only script in the colleciton which needs a specific style of induction, ideally one which draw attention to the processes of memory, thought and recall. Coupled with the previous induction it makes a great first session hypnosis for regression work.