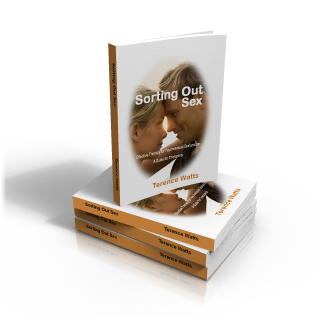 Sorting Out Sex - A therapist's guide

Working with sexual difficulty can be a difficult area for many therapists. Not only are many people uncomfortable about discussing such matters but there are a great many misconceptions and pitfalls to cause problems for the therapist. Intimate knowledge of the genuine differences between male and female 'sexual thinking' is essential, as is also a profound working knowledge of the way the human body functions sexually. This book gives you all of that and even includes many information sheets to hand out to your clients when necessary.

When Doctors and consultants such as Urologists and Gynaecologists know that you are able to work effectively in this area, they will want to refer many of their patients to you; it is a fact that they just don't know what to do with a sexual problem when it is not caused by physiology.

Sorting Out Sex is 270 pages of professional expertise and contains the essentials from the highly successful Psychosexual Dysfunction training course written by Terence Watts for professional therapists and based on his vast experience of working with many types of sexual difficulties. In 2007, Terence was awarded the prestigious MCGI - Member of the City and Guilds Institute of London, UK - for this work and was the first therapist in the psychology sector worldwide to receive this accolade.

Several specialised hypnotherapy scripts are included and the book will give the professional therapist the necessary skills to work effectively with almost all, if not all, the psychosexual difficulties presented by clients in the therapists' office, including:

But that's not all. Also covered are: relationship issues, sexual confidence, analysis of male/female sexual attitudes, anatomy, sexual personality, contentless working with guilt, shame and embarrassment, the sexual belief system, working with couples... along with a selection of hypnotherapy scripts and hints on how to work safely and confidently in what is essentially an extremely intimate circumstance.

The book provides a cognitive questionnaire which, itself, frequently acts as a therapy on its own, and explores the client's sexual personality in depth - many times, what appears to be a sexual problem is actually more to do with the attitude to, and belief about, relationships in general. There are very few people indeed who do not experience a great enlightenment as a result of the material presented here - and that includes the therapist!

Many attendees of the classroom-based course have stated that not only did they gain a valuable and much-needed skill (50% of people will suffer sexual difficulties at some point in their life), it was also an astoundingly powerful journey of self-recognition (not to mention the many who said their own sex-life improved 100%!)

Sorting Out Sex should be on every therapist's bookshelf!